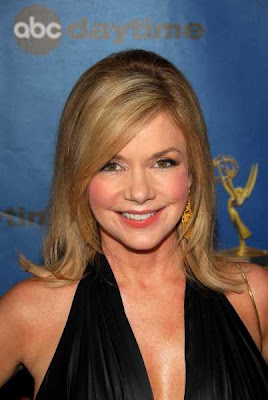 Bobbie Eakes (All My Children)
Scheduled for Friday and Saturday, June 12-13, the ABC Block Party, hosted by Cameron Mathison ("Ryan Lavery" on "All My Children"), promises entertainment for all ages. Held at the Hall of Fame Park (adjacent to Fifth Avenue between Broadway and Demonbreun), kids, along with more daring adults, can check out the two "Wipeout" obstacle courses. This fun-filled landscape somewhat tones down the challenges posed on the popular ABC "Wipeout" reality program, but hilarious (and painless) pratfalls, slips - in a word, wipeouts - are just as likely in this area next to the Dr Pepper®-McDonald's® Family Zone.

There will be plenty of music too, courtesy of the Divas of Daytime: Kathy Brier and Kassie DePaiva ("Marcie McBain" and "Blair McBain," respectively, from "One Life to Live"), and Bobbie Eakes ("Krystal Carey" on "All My Children"), who are making their Nashville debut as a trio. In addition to performing Country and Southern rock favorites at the ABC Block Party Friday and Saturday, they will perform at a Saturday breakfast show at B. B. King's Blues Club, as well as an unplugged in the Durango® Acoustic Corner inside the Greased Lightning® Fan Fair® Hall.

There will be special musical performances by several up-and-coming Country artists including Love and Theft, and Caitlin & Will (Friday, June 12) and Sarah Buxton (Saturday, June 13).

Beyond all that, the ABC Block Party will offer trivia contests (including one that pits experts on "Grey's Anatomy" against specialists in "General Hospital"), Country line-dance lessons, a photo booth where people can take away a souvenir 4X6 photo from the ABC All Star Block Party, and more. ABC-branded souvenirs will be given away, including beach towels, cowboy hats, gift baskets, sunscreen and T-shirts. As a further respite from the anticipated heat, the network will distribute free snow cones.