Soap Opera Digest has learned that Emmy-nominated actor Jeff Branson (ex-Jonathan, AMC) has been tapped to fill the the long-awaited recast role of GL's Shayne Lewis. Branson left Pine Valley earlier this year and will be heading to Springfield on December 1 as Josh and Reva's son, who had recently gone missing in Afghanistan. Branson is the seventh actor to play the part. Shayne was last seen on-screen back in 2004.

source:soapoperadigest.com;photo-ABC
at 7:36 PM No comments: 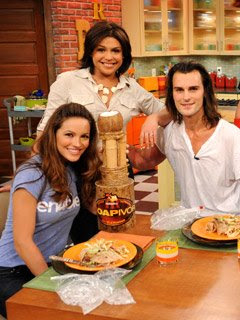 Jeff Probst, host of "Survivor," will be on the "Rachael Ray" show tomorrow to test the merits of three daytime stars: Chrishell Stause (Amanda on "All My Children), Brandon Buddy (Cole on "One Life to Live"), and Kane Manera (Grady on "Guiding Light").

They'll be competing in a "Soapvivor" contest -- except there won't be an island, or bugs or starving, hygienically-challenged contestants.

"Soapvivor" is people competing in games like "getting a high paying job with no experience," "talking to themselves," "having sex in caves," and "driving halfway across town when you could just use a phone."

Tune into "Rachael Ray" today on CBS to see who wins!
at 2:32 AM No comments:

Bianca Back On All My Children With A Big Surprise

"All My Children" is getting a double dose of star power. Eden Riegel, who played the beloved Bianca Montgomery from 2000-2005 (with appearances in 2006 and 2007), is coming back to the show. She's bringing along actress Tamara Braun, best known for her work as Carly on "General Hospital" and recently as Ava on "Days of our Lives."

Bianca, daughter of Erica Kane, has fronted major storylines that has gained noteable praise and attention from soap fans and critics alike. She is best known as the first openly gay front burner character on daytime. Bianca MOntgomery has been though a lot in her short time on soap opera earth. Her character basically survived everything: a rape, having her baby stolen, anorexia, coming out, having Erica Kane as a mother. When last seen in 2007 (she arrived to visit her nephew, Ian), Bianca was living with Paris with her young daughter, Miranda.

Bianca is returning to Pine Valley with a new girlfriend, Her name is Reese Williams, played by none other than Tamara Braun. Reese is a confident and successful architect who Bianca has been living with in Paris. When last seen, Bianca was considering a relationship with Zoe, the transgender rock star played by the amazing Jeff Carlson.

More importantly, how are her sister Kendall (Alicia Minshew), her mother Erica (Susan Lucci) and her brother-in-law Zach (Thorsten Kaye) going to handle Reese? The Kane clan is rebuilding which is good. AMC has centered too long around characters like Ryan, Babe and Greenlee who have no real family ties to the community yet have been in storylines that seemed to dominate all of the shows focus. The return of Bianca will help the show facilitate a more direct approach to focusing on family and community. All of Erica's family should be in Pine Valley. They are a force to be reckoned with.

All My Children airs on ABC and on SOAPnet weekdays. 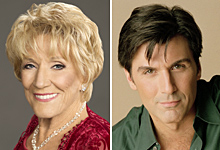 Quick Hits: AMC's Big Twister, Y&R Sees Double & More | Soaps News | 9/16/2008 New
Storm Warming: A state-of-the-art tornado will hit All My Children's Pine Valley Oct. 16. "We're taking CGI effects to the next level," head writer Chuck Pratt says. "We're not just breaking the fourth wall, we're breaking the third wall, too. It's big, groundbreaking stuff." The devastation continues Oct. 23 when fan fave Vincent Irizarry returns to the soap as evil doc David Hayward.Double trouble: Veteran actress Jeanne Cooper — Kay on The Young and the Restless — finally won her first competitive Emmy this summer, after 11 nominations and a lifetime-achievement award. Will she make it two in a row? Cooper should have won the gold back in 1990 when she doubled as Kay's look-alike Marge, a greasy-spoon waitress with dubious morals, and may finally get her due. My spies tell me Marge will return to the show this fall, just as the unstoppable Cooper turns 80.Boss 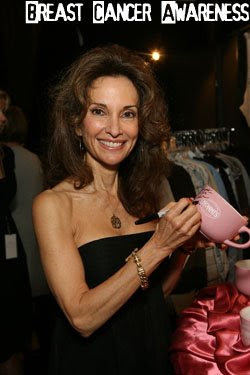 The fundraiser kicks off October 1st, when fans can begin bidding for the mugs on the eBay Giving Works Web site. Soap celebrity signatures include Susan Lucci, Van Hansis, Melody Thomas Scott, Cameron Mathison, Kirsten Storms, Jack Wagner, Heather Tom and many more. The mug auction can be accessed through www.nonnis.com or www.ebay.com/nonniscelebritymugs. Bidding is open throughout the month of October.

Additionally, for every box of Nonni’s Biscotti sold, customers can enter their UPC code at www.nonnis.com and 75 cents from that box (retail $3.49) goes to Susan G. Komen for the Cure. So far, the partnership has raised thousands of dollars to combat breast cancer.

source:we love soaps
at 4:24 AM No comments: