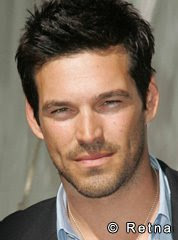 The Hollywood Reporter announced that Eddie Cibrian will be joining the cast of CSI: Miami when the show kicks off it's eight season this fall. He will play an officer from the Hollywood division that joins the Miami team. Cibrian, a series regular on Third Watch and most recently had a guest-starring role in Ugly Betty, was once in daytime, starring on the now defunct drama Sunset Beach. The eighth season of the series premieres on Monday, September 21 on CBS.
at 10:57 PM